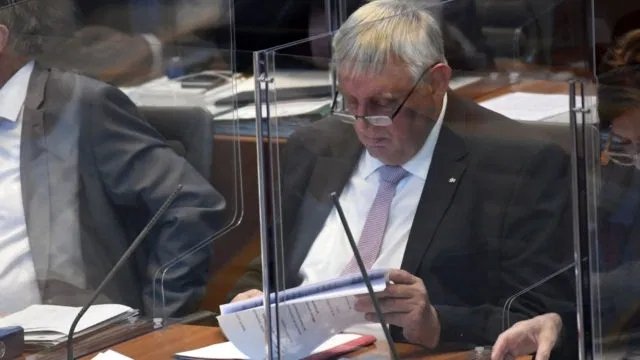 German authorities on Tuesday ordered fresh coronavirus lockdowns in two districts — the first since easing restrictions and a major setback for hopes of a swift return to normality.

The new lockdowns in Guetersloh and neighbouring Warendorf in western Germany came after a coronavirus outbreak at a slaughterhouse that has infected more than 1,500 workers.

“For the first time in Germany, we will return an entire district to the measures that applied several weeks ago,” said Armin Laschet, state premier of North Rhine-Westphalia, announcing the measures for Guetersloh.

That lockdown, set to affect 360,000 people, will stay in place until at least June 30, Laschet said.

‘Emergency brake’
The outbreak at a slaughterhouse run by the Toennies meat company that employs 7,000 people in Germany’s most populous state is the biggest since the country began lifting virus lockdown measures in early May.

Local authorities across Germany agreed then to pull an “emergency brake” and reimpose social curbs if the infection rate rises above 50 cases per 100,000 residents over a week in a particular district.

The rate in Guetersloh has soared well above that, sitting at 263 cases per 100,000 residents on Monday.

Schools and kindergartens have also been closed ahead of school holidays which will start this weekend.

Guetersloh residents were understanding about the new lockdown. “I had actually expected this much earlier,” said Ullrich Wegner.

Brigitte Jaeger agreed: “It is probably a little too late, otherwise it would not have spread so much.”

The new lockdowns come as Germany and the rest of the EU begin taking steps towards getting tourism up and running again, with many European borders reopening just last week.

Several planeloads of German tourists have flown to Spain’s Mallorca island to take part in a test of plans to reopen the popular destination as the country emerges from its coronavirus lockdown.

But the latest flareup prompted authorities in the German island of Usedom to turn away a couple from Guetersloh.

Bavaria also announced Tuesday that its hotels will not be taking bookings from anyone from Guetersloh or other high-risk areas.

Under control
Several COVID-19 outbreaks at slaughterhouses in Germany and France have put a spotlight on working and housing conditions facing the workers — many of whom come from Romania or Bulgaria.

The German government has responded by banning the use of subcontractors in the meat industry.

Toennies, Germany’s largest meat producer by both output and turnover, has announced its own measures to improve conditions, including direct contracts with employees and “sufficient and appropriate” living space.

Company head Clemens Toennies has publicly apologised for the outbreak, saying the company was “fully responsible”.

But Germany has also seen new coronavirus clusters in residential buildings in Lower Saxony and in Berlin, where 370 families living in high-rise flats were placed under quarantine in one neighbourhood last week.

The developments have pushed Germany’s virus reproduction rate (R0) to 2.76, meaning 10 people with COVID-19 infect on average 28 others.

The Robert Koch Institute (RKI) disease control centre has warned that for the infection rate to be deemed under control and slowing down, the rate has to stay below one.

But the RKI remained optimistic on Tuesday. “If we are able to keep the number of cases low the whole time, then we will be able to contain and end outbreaks locally, and that will remain the case,” institute head Lothar Wieler said.