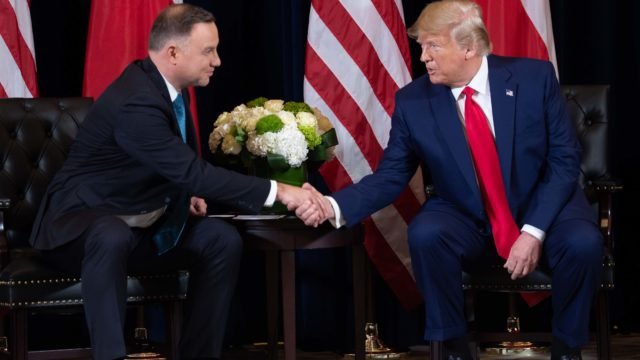 Polish President Andrzej Duda will be hoping for a pre-election windfall from a trip to Washington on Wednesday that risks being overshadowed by the fallout from revelations about Donald Trump’s foreign policy.

The visit from Duda a populist closely allied with Trump comes a day after the publication of former security advisor John Bolton’s tell-all tome and four days before a crucial presidential election in Poland.

It will be Trump’s first meeting with a foreign leader since the coronavirus pandemic hit in March, and both delegations will be tested for the disease before the talks.

The central expectation on the Polish side is that Trump will announce extra US military assistance for Poland — a constant demand from Warsaw, particularly in the wake of Russia’s annexation of Crimea in 2014.

The US could boost the number of its troops deployed in Poland as well as provide fighter jets and military transport planes, according to Polish media reports.

But a senior US official cautioned that it would be “premature” to talk about troop deployment in terms of “any specific number to any specific location”.

“President Duda will have an opportunity to look very presidential and that’s, I think, a big part of this,” said Michal Baranowski, director of the Warsaw office of the German Marshall Fund of the United States.

Baranowski said the visit could help “mobilise” Duda’s electorate in Sunday’s vote and even help boost support for Trump among Polish American communities in swing states ahead of the US election in November.

The hastily arranged visit is expected to be accompanied by protests by gay rights campaigners against Duda, a right-winger who has railed against “LGBT ideology”, comparing it to communism.

Duda, who is backed by the governing Law and Justice party, is the current frontrunner in the election but the centrist europhile opposition candidate Rafal Trzaskowski has been catching up in the polls.

Commentator Boguslaw Chrabota, writing in the Rzeczpospolita daily, said Duda was “desperately looking for a triumphant ending” to his campaign but the meeting with Trump carried “considerable risk”.

Chrabota cited the risk in promising large amounts of Polish taxpayers’ money to pay for US hardware.

In recent years, Poland has agreed to buy US rocket launchers, fighter jets and a Patriot anti-missile system and has closely aligned itself with Trump — to the consternation of some of its EU and NATO partners.

Rzeczpospolita said there was also concern within the Law and Justice Party that Trump could “make an unpredictable move or comment” that could end up damaging Duda, whose eagerness to oblige Trump has been widely mocked by his opponents in Poland.

Poland will also have to tread carefully following Trump’s announcement earlier this month of a large-scale withdrawal of US troops from Germany so as not to be seen to be taking advantage of a NATO ally.

A report in Poland’s Dziennik Gazeta Prawna said that 30 US F-16 fighter jets currently based in Germany could be transferred to Poland.

The report also said the US could send up to 2,000 extra troops to Poland and transfer the command of the Fifth US Army Corps from Kentucky to Poland.

‘Do we really want Fort Trump?’

NATO promised Russia in 1997 not to set up permanent bases in the former eastern bloc. As tensions have grown however, the alliance has instead rotated troops through front-line countries.

Even though the US troops would still be rotated under any scenario, Polish officials have raised the prospect of a more permanent US presence — perhaps in a facility paid for by Warsaw dubbed “Fort Trump”.

Bolton’s book “The Room Where It Happened”, which Trump describes as “fiction”, mentions one particular White House meeting in which Trump appeared to forget he had agreed in principle to a “Fort Trump”.

“Do we really want Fort Trump?” he is quoted as saying.