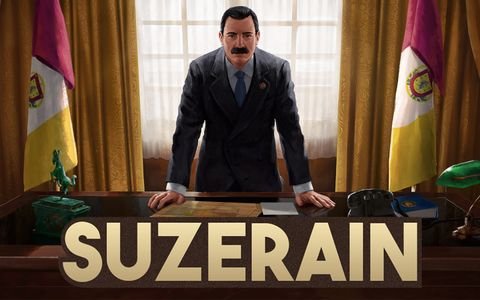 Suzerain is a fascinating text-based adventure about the trials and tribulations of politics, complete with engaging characters and twists aplenty.

Even the greatest of strategy games can struggle with the intricacies of politics. While the likes of Crusader Kings 3 are standout examples of the sometimes-treacherous nature of ruling a country, even beloved franchises like Civilization can leave players wanting a little bit more. Thankfully, Suzerain from developer Torpor Games is aiming to rectify this, and does so mostly successfully.

Suzerain is a text-driven political game set in the fictional nation of Sordland. The player takes on the role of the newly-elected President Rayne, who is looking to get his country out of a recession but with pitfalls on every side of his decisions. Presented with a map of different cities and towns across Sordland, the player must keep its different regions and powerful individuals happy, all the while keeping an eye on external powers looking to take advantage of the turmoil.

The amount of information given about Sordland is impressive, and one of Torpor Games’ biggest successes. The country’s status in the 1950s is given a well-written lore, with an effective Wikipedia entry always at the player’s fingertips to learn more about the nation. Sordland has a history of revolution, with each leader since the nation’s first steps into democracy suffering from issues like despotic tendencies and corruption.

This depth follows through to Suzerain’s characters, including President Rayne himself. Born in 1908, the player character lived through revolution before joining the ruling United Sordland Party and watched as leaders rose and fell. The player is able to give Rayne a backstory, although this doesn’t make much difference to the game. Instead there’s flexibility within the player’s choices as president, deciding to be a kind, compassionate ruler or diving into their ego, belittling people and undermining democracy at every turn.

Whatever path the player chooses, it’s going to be difficult. Sordland is a country in recession, with enemies at the gates, rife internal corruption, and insidious cells. The player will need to make some choices about what direction to take Sordland in, all the while with a limited budget and political enemies hoping for failure. All in all, it feels a bit like a slow-burn version of Reigns, rather than the quick replays of the title and its Game of Thrones spin-off.

What sets Suzerain apart is its supporting cast, from Rayne’s family and close advisors through to the media moguls and steel magnates that could be allies or enemies depending on the player’s choices. Behind every character stands a different set of thoughts, dreams, and aspirations, much like kingdom sim Yes, Your Grace. Torpor Games has done a fantastic job of showcasing a variety of different ideologies within its characters, too, and focuses on such important subjects as women’s rights and the pros and cons of free market economics.

It’s fair to say that Suzerain is extremely niche. Early on the game asks the player’s opinion on realpolitik, which sets an early bar for the kind of subject matter Suzerain expects the player to understand. However, it’s fair to say that those who are into politics, particularly the transformation of countries after the Second World War, will find the game fascinating.

However, it is worth pointing out Suzerain’s limitations. Visually it’s very static and heavy on text, meaning that those after a more dynamic experience may find it stifling. Equally, this reviewer did run into a bug where no progression could be made around halfway through a first playthrough, though thankfully the game is a short and replayable experience given the different options to take.

Suzerain’s extremely specific position in the gaming market – the only real parallel is 1988’s Hidden Agenda – certainly means that the game won’t be for everyone. All in all, though, Suzerain is an interesting game with some serious quality behind it. Those who want more machinations in their strategy games, particularly when tied to some characters with genuine depth, will find a lot to love.

Suzerain releases 4 December 2020 for PC. Screen Rant was provided with a PC download code for the purposes of this review.