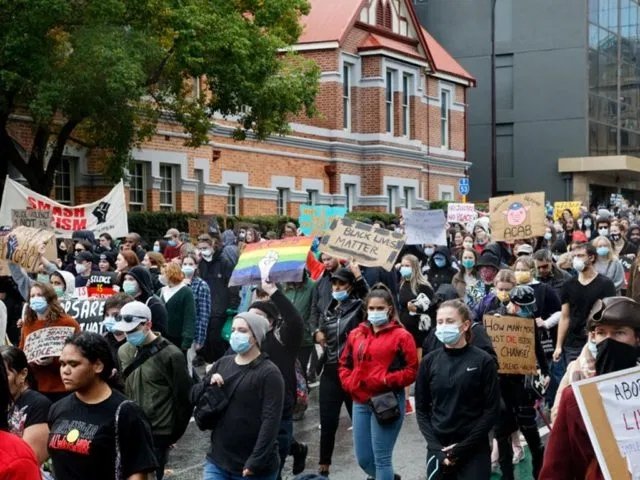 Thousands of protesters rallied for racial equality in cities across Australia on Saturday despite official warnings the demonstrations could undermine the country’s success in suppressing the coronavirus.

Smaller protests for Aboriginal rights were held in Darwin, capital of the Northern Territory, and towns in neighbouring Queensland — both regions with numerous indigenous communities.

“We are here to support our future as indigenous people and to walk against the injustices of… what happens to our people, with over 400 black deaths in custody,” one unidentified protester told public broadcaster ABC at the Darwin march.

With the exception of the Darwin demonstration, which had authorisation, the other protests violated official injunctions against mass gatherings instituted three months ago to curb the spread of the coronavirus.

But organisers made efforts to keep the protesters spread out and mostly wearing face masks, and police did not intervene.

It was the second straight weekend of large protests in Australia, initially organised in solidarity with the Black Lives Matter movement in the United States following the killing by a white policeman of African-American George Floyd.

Elsewhere in Asia, hundreds gathered in a Taipei park with some holding signs with slogans such as “This is a movement, not a moment”.

At one point the crowd went down on one knee to mourn black people killed by police in the United States and held eight minutes of silence to remember Floyd.

Dozens also marched in Tokyo in the rain to raise awareness about racial discrimination.

– Racial injustice -The movement has resonated particularly strongly with many in Australia, a country also wrestling with the legacy of racial injustice towards the country’s indigenous peoples.

Aboriginal Australians are vastly over-represented in the prison population, and there have been more than 400 indigenous deaths in custody in the last three decades.

No prosecutions have been brought over the deaths, despite dozens of investigations, inquests and in some cases video evidence of abuse.

Many protesters carried signs reflecting the Aboriginal experience, including “Stop deaths in custody” and “White Australia stop lying to yourselves”.

In parallel with the Black Lives Matter rallies, dozens of people protested in Brisbane, Sydney and Melbourne against the prolonged detention of asylum-seekers under the government’s tough refugee policies.

Police had banned all those protests for violating coronavirus health regulations, but they took place largely without incident.

Australia has been one of the most successful countries in containing the epidemic, with about 7,000 cases and 102 deaths for a population of 25 million.

Health officials said this week that the virus had been virtually eliminated in many regions of the country, though there continue to be a handful of new cases daily in the most populous states of New South Wales and Victoria.