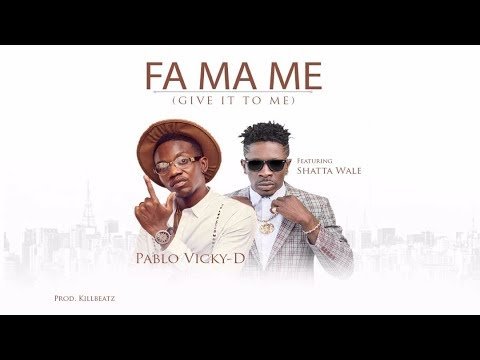 The long awaited music video titled ‘Fa Ma Me’ (Give It To Me) featuring Shatta Wale by HHG Records star artiste, Pablo V-Dicky (PVD) has finally dropped. The visuals drop just a few days after he debuted the single on major radio stations in Nigeria and Ghana.

The song produced by Killbeatz has been out for quite a few weeks now and also marks the third music video PVD has released. There are video clips for ‘Criminal’, ‘Tender’ featuring the late Ebony and ‘Another One’ also doing well.

The multi-talented Shatta Wale dropped some noticeable lines, and also showed off his versatility in the music video.

But the new music video is not all that the artist has to announce today: he’s also going on a media tour to interact with his fans more.

The marriage of the visuals and the track were spot on. Vertex is definitely the perfect director for the job. Vertex is the director that gave us the visuals for King Promise, Samini, Sarkodie and many more.

We also see renowned actress and Instagram model Moesha feature in the video.

Along with being able to watch the music video for the song, ‘Fa Ma Me (Give It To Me)’ is currently available on iTunes, Spotify, Tidal, Google Play, Apple Music, Deezer, Amazon Music and more for purchase.

Pablo V-Dicky will keep setting the bar higher as he urges his fans to stay glued to his social media platforms for more updates at @pvdworld on Instagram, Facebook and Twitter.