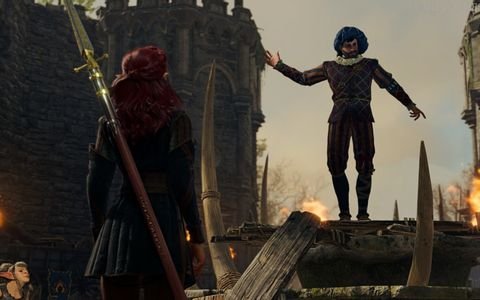 Baldur’s Gate 3 may still be in early access, however with this version of the game there are several rare blades around Act One for players to find.

Although Baldur’s Gate III is still in early access and continuously being revised, there are already several rare weapons spread throughout Act One for players to come across. There are plenty of great finds with specialized flavor text and lore surrounding them. Some are spread in more obvious places, like a merchant’s wares, and others are lost out in the wilderness.

While players can get simple plus one weapons from Dammon in the Druid’s Grove, there are several better and more special weapons that can be found within the game. Weapons with actual names and special enchantments or effects. Weapons that are worth searching out.

Blooded Greataxe – Can be bought from Dammon in the Druid’s Grove.

Doom Axe – Can be bought from Brem in the Zhentarim Hideout.

Dragon’s Grasp – Can be bought from Arron in the Druid Grove.

Exterminator’s Axe – Dropped by Gekh Coal in the Decrepit Village.

Jagged Spear – Dropped by the Torturer Spike in the Shattered Sanctum.

Light of Creation – Found in the Arcane Tower.

Shortsword of First Blood – This can be found in the Decrepit Village on the body of the Executed Deep Gnome.

Sickle of BOOOAL – Found at the Festering Cove in the Underdark.

Sorrow – Found in the Hidden Vault.

Sussur Dagger – Rewarded for completing the quest Finish the Masterwork Weapon in the Blighted Village.

Sussur Greatsword – The reward for completing the quest Finish the Masterwork Weapon in the Blighted Village.

Sussur Sickle – The reward for completing the quest Finish the Masterwork Weapon in the Blighted Village.

Sword of Justice – This can be taken off the body of Anders on the Risen Road.

Ritual Axe – Found on a table near Abdirak in the Shattered Sanctum.

Ritual Dagger – Found on a table near Abdirak in the Shattered Sanctum.

The Watcher’s Guide – Found inside a trapped sarcophagus in the Dank Crypt.

Visions of the Absolute – Spearhead can be found on the Owlbear, the handle is on True Soul Edowin.

Worgfang – Found in the Worg Pens.