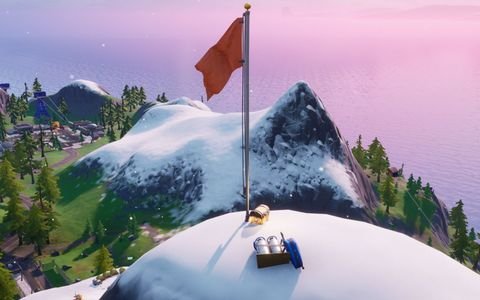 Fortnite: Where to Find Beskar Steel (Where the Earth Meets the Sky)

Players can get the Mandalorian skin in Fortnite Season 5 from the start of the Battle Pass. To upgrade his armor, they will need to complete a quest.

Likely the most anticipated Battle Pass skin in Fortnite Season 5 is Din Djarin, The Mandalorian, from Disney’s hit original series. Where Fortnite Season 4 leaned heavily into the Disney/Marvel crossover with the introduction of popular Marvel superheroes, Season 5 focuses more on Fortnite lore. Still, the inclusion of The Mandalorian and The Child as an unlockable skin this season shows that Fortnite’s partnership with Disney is far from over. It’s likely most fans will want to collect not only the skin, but also all the cosmetics and upgrades that come with it.

Owners of the Season 5 Battle Pass will unlock the Mandalorian skin at Tier One. However, the skin comes with two other style variants and other cosmetics, including the Baby Yoda accessory, to unlock later in the season. Unlike previous seasons, players are going to need to complete a special questline to unlock one style variant. There are eight pieces of armor the player will need to find or earn by completing steps in the quest. Players won’t need to wait to have the full set, however, and can equip any pieces they find as soon as they get them. One of the steps in this questline is to find Beskar Steel Where the Earth Meets the Sky. At first, that location name may seem needlessly cryptic, but players who participated in Season 4 are likely to recognize the location. Here’s how to find Beskar Steel where the Earth Meets the Sky and receive the Mandalorian armor upgrade in Fortnite Season 5.

To find Beskar Steel Where the Earth Meets the Sky to complete this portion of the quest, players will need to find the tallest point on the map. This is Mount Kay. It is located in the southeast region of the map, just south of Catty Corner. Players may recognize this as a location from Week 9 of Season 4, when players needed to dance at the highest and lowest points on the Fortnite map.

Once there, players will need to search the chest at the base of the flag on the mountain peak. The chest comes with an ID scanner. Players won’t need to do anything special here; they only need to have the Mandalorian skin equipped for the chest to open for them. The Beskar Steel ingot should appear, along with some other decent gear.

Players will need to wait until they’ve progressed in the Battle Pass to unlock some of these steps and complete the armor set.

How To Find (& Catch) Espurr in Pokemon Go