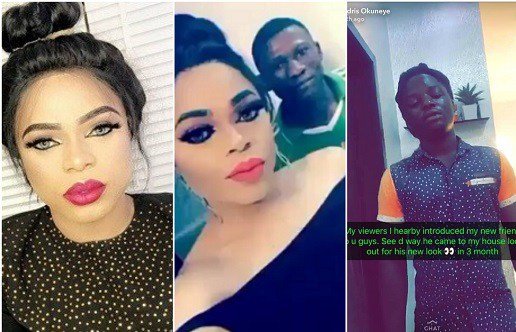 Nigerian Internet personality, Idris Olanrewaju, otherwise known as Bobrisky, has accused his gateman, one Jacob of trying to sell him out for N2m.

Bobrisky on Monday took to his Snapchat handle to call out Jacob, accusing him of trying to sell him to his haters.

The cross dresser also said that his gateman lied that his father was ill.

He said that he gave Jacob the sum of N65,000 to go and take care of his sick father only for him to find out that he was staying with his friend in Lagos.

“I don’t want to hear anything about Jacob anymore pls guys Jacob wasn’t sick it was a planned game but it’s fine….If you want to help him like some people claim to give him 2million go ahead. I wish you all the best of luck. Jacob told me his father was sick that they are cutting his father’s leg…. I gave him 60,000 and also paid for his tfare to go home and see his father only for me to find out that he is in Lagos in his friend’s house.

“People think they want to use Jacob to get info, he knows nothing about me. They ask him to tell people I am owing him four months salaries. Have you guys forgotten so soon how I showed you guys here when I’m paying him.

“No some people said they will give him 2million, they used Jacob against me. I’m too classy for that; anyone of you here are free to help. At least, I did the little I can and God will reward me.”