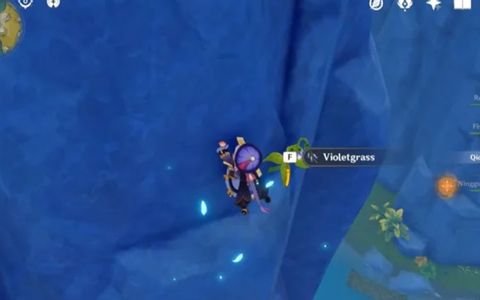 Genshin Impact: Where to Find More Violetgrass (& What it’s For)

Violetgrass is an essential item to growing your characters in Genshin Impact. This guide will show players where they can find them and what they do.

Violetgrass is a valuable ascension item in Genshin Impact. This guide will show where players can find it. Genshin Impact allows players to make each of their four playable characters stronger by ascending them. This requires the player to reach certain Adventure Ranks by completing missions, finding treasure, and finishing daily commissions. A major part of the game would be exploring the world and finding every little secret hidden in each nook and cranny. The Violetgrass spawns in a very specific location in Teyvat. This guide will help players locate it and explain why players should seek it out in the game.

The Violetgrass is used to ascend Qiqi, one of the 5-star characters available in the game. This Cyro character is one of the stronger sword-wielders in the game and can be unlocked by participating in wishes. The wish system allows players to use their Primogems to purchase items to roll for characters and weapons. Although, the 5-star characters are amongst the harder to unlock in the game, having a 0.6% stat chance of pulling for them. Players can invest real-world money into the game to purchase more materials if they feel it is taking them too long to pull for a character they really want. Violetgrass is an essential material needed to make Qiqi stronger. Here’s where players can find it.

Where To Find Violetgrass In Genshin Impact

The Violetgrass can be found in the Wuwang Hill area of the map. Warp here and begin climbing the sides of the mountain to find the Violetgrass jutting out of the side of it. Fortunately, players will be able to find at least three Violetgrass growing together, making it easier to collect them all for Qiqi’s ascension. Be careful when exploring this area as the local monsters will try everything in their power to knock the player off the cliff. Collect enough to make Qiqi as strong as possible.

Genshin Impact continues to add new characters in the story and in the banners. There’s quite a thrill that comes from rolling for a character for a chance to unlock the better characters in the game. On the other hand, players can experience the entire game without needing to put any money into the game. Although, they will struggle to get the more powerful characters in Genshin Impact. It ultimately comes down to what the player values, a fatter wallet or a larger 5-star roster.

Fortnite: Where to Find Beskar Steel (Where the Earth Meets the Sky)

Genshin Impact is available now on PlayStation 4, PC, and Mobile.