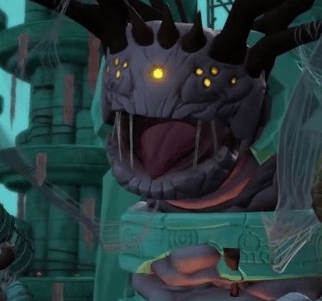 Gods Will Fall: How to Defeat Krannus (Boss Guide)

There are many different Gods that players will need to defeat in Gods Will Fall. This guide shows players how to defeat the God of Knowledge Krannus.

Throughout the course of Gods Will Fall, players will need to face off against a host of incredibly deadly enemies. Each level will throw dozens of enemies in front of the player that will each require their own strategy and combat techniques to bring down. Getting through these enemies will be important if the player wants to make it to the Gods of each realm.

Every realm has a God in control of it that will function as the final boss of that area. The Realm of Knowledge is ruled by the God Krannus, whose obsession with knowledge has made him one of the most intelligent creatures in the world. This guide shows players the easiest way to defeat Krannus.

Gods Will Fall – How To Beat Krannus

The God of Knowledge is a disturbing looking creature who seems as though he would be able to deal some considerable damage to the player. During the course of the fight with Krannus he actually won’t attack the player whatsoever, and will instead use his minions to fight for him. In order to defeat this god the player will need to take down Krannus’ minions first, which is by no means an easy task.

Before players start this fight they should probably drop by and examine the two pillars on either side of the walkway leading to the boss arena. By doing this the player will grant their warrior two brand new skills to use in combat that will make them much more powerful. These are randomly assigned so they might not actually grant the player anything helpful, but they could also be a deciding factor for ending the fight easily.

Once players walk through the gateway into the boss arena they will see Krannus right in front of them at the back of the room. No matter what the player does though they won’t be able to deal any damage to Krannus at this time. Instead, they will need to fight against the two goat-men protectors that are on either side of the boss. Luckily, these enemies only have one attack that they can use, so the player will just need to either dodge backward or parry them to make an opening to attack. Each minion will have a few health bars that the player will need to deplete, and the player should probably focus on one at a time to make things easier on themselves.

Once the player manages to bring both of the goat-men down, Krannus will roar at them and cause a wall to the right to come crumbling down. The player is then able to climb up this wall and go up a small walkway that leads them behind Krannus. From here the player can make their way up on top of Krannus’ head where they are able to jump and slam down on his head. Doing this a couple of times will kill the boss and the player will defeat Krannus for good.

Gods Will Fall can be played on Xbox One, PlayStation 4, Nintendo Switch, and PC.