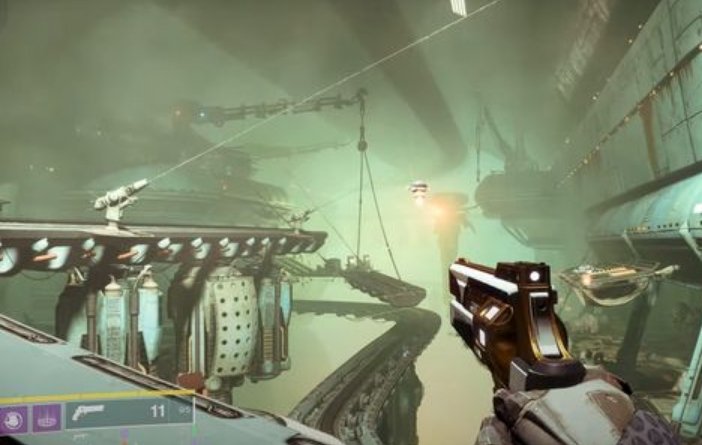 How To Complete The Augment Technocrat’s Iron in Destiny 2

Players can destroy fleets of scanners in Technocrat’s Iron in Destiny 2: Beyond Light. To complete a Triumph, they’ll need to destroy them in order.

Completing all 8 of Variks’ Augment sabotages in the Eclipsed Zone of Destiny 2: Beyond Light will earn a player the Augmented Obsession Triumph. To do this, they will need to find and destroy three fleets of Scanners each week for several weeks. These Scanners are typically located in Sectors of the Eclipsed Zone. Each of the fleets will be guarding a terminal, which the player will want to hack upon destroying all the scanners and nearby enemies. Before players can get started, they will need to stop and speak to Variks and purchase a Braytech Transponder. This unlocks the necessary buff that will allow them to destroy the drones properly. Each weekly quest to destroy Scanners is a step toward completing the Augmented Obsession Triumph, which is a Europa Secrets Triumph needed for the Splintered Title and Seal in Destiny 2.

The Augment Scanner quest during the week of December 8 sends players to the Eventide Ruins, and they can choose their Augment from there. The Augment Technocrat’s Iron can be found deep within the Riis-Reborn Sectors. Players might remember this location from finding Entropic Shards. Once inside, there are three sets of scanners for players to find and destroy. An activated Braytech Transponder will give players a buff that reveals the order in which to destroy each Scanner and Drone by highlighting them in yellow. Players can only get one Braytech Transponder per week, so they will need to make sure they shoot the drones in the proper order to get closer to unlocking the Triumph. They will also need to be certain not to mix up their Augments, or they will not earn their Triumph for the week. Here’s how to complete the Scanner Riis-Reborn Sector Augment Technocrat’s Iron quest in Destiny 2: Beyond Light.

How To Complete The Augment Technocrat’s Iron In Destiny 2

As the Eclipsed Zone changes each week, players can decide which Augment to pursue in the various Sectors. The other options for this week include the Augument Riis-Reborn Approach and the Augment Kell’s Rising if players have not completed these already. This guide focuses on destroying the Augment Technocrat’s Iron Scanners.

To begin the quest, players will need to purchase a Braytech Transponder from Variks for 50 Herealways Pieces. Players are limited to one of these per week. Once activated in the weekly Eclipsed Zone, this week in Eventide Ruins, the transponder’s signal will attract House Salvation techno squads. Defeating the squad and the boss grants players the Scanner Augment buff.

Players will need to pick up this buff and head to Technocrat’s Iron. Players cannot fast travel while the buff is active, or it will disappear. To reach the location, players should enter the Riis-Reborn Approach and take the elevator. They can follow the path through the approach to the teleporter. Once out of the teleporter, follow the path and keep to the left. Eventually, players will see Technocrat’s Iron on their screen.

Once in Technocrat’s Iron, players will find the first group of drones in a round structure just beyond a path made of pipes. They need to destroy the drones in the order they light up in yellow, or the quest will not register as completed. Once all drones have been destroyed in this first room, players need to interact with the terminal to complete the section.

To reach next group of drones, players should cross the round room to another pathway made of pipes and enter the building there through the doors. They should then enter the first door on their right. They should follow the path to the right of the staircase and go through the archway leading to what looks like some tracks. The drones are hovering around the tracks to the left. Players will once again need to shoot them in the order they light up yellow, then interact with the terminal.

The last group of drones can be found in the large, blue-lit arena room. To reach it, players should follow the tracks where the second set of drones were found and jump to a set of metal stairs. They should go through the door and turn right. Following the path will lead them to this final room where they can destroy the last set of drones, interact with the last terminal, and complete this part of the Triumph.

This video from Esoterickk on YouTube demonstrates the location of each Scanner fleet in Technocrat’s Iron. In the coming weeks, players will need to return to the Bray and Vex Sectors to destroy more of these.

Where to Find The Sweaty Sands Gnomes in Fortnite