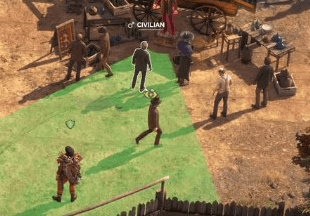 How to Defeat The Final Boss in Desperados 3 (Tips, Tricks, & Strategies)

Desperados is a game that is not without its host of challenges for the player. This guide shows how to defeat the final boss of the game Frank.

Exploring the world of Desperados 3 is an interesting experience. Whereas most games of this style tend to be medieval fantasy, this one instead lets the player take control of a group of gunslingers in the Wild West. Players will need to use their special skills and guns if they want to survive till the very end of this game.

Without a doubt one of the hardest aspects of this game though is the fight at the very end against the final boss Frank. Frank himself doesn’t cause much trouble, but players will be forced to take out all of his goons without being spotted. If they are unable to do this then they won’t be able to complete this mission. This guide shows players how to defeat Frank.

Desperados 3 – How To Defeat The Final Boss Frank

This is without a doubt one of the most difficult fights in the game as players will need to bring down several other enemies before they can beat Frank the final boss. The issue with this fight is that Cooper is standing in the center of this area across from Frank in a standoff. If any of the other players are spotted or they mess up in some way then Frank will immediately kill Cooper. In order to solve this fight players will first need to take down all the nearby regular enemies, then dispatch the stronger blue enemies, and then Cooper will be able to handle Frank.

The first thing that players will want to do is look at the gate in front of them. There are two men who will walk back and forth in front of them. The player will want to sneak up and use Hector to take down both of these men simultaneously, and then hide both of the bodies. From here Hector should walk to the left to hide in some bushes and then take down the guard that’s nearby.

The player will then want to take Issabelle up the ladder to the top of the church and wait. From here the player should take control of McCoy, go up to the ladder, but not climb it yet. They will be able to take out the enemy leaning against the chimney first. They can then quickly run up the ladder to be with Isabelle, and then work with her to take down the other two men on top of the church. McCoy will then need to climb down and go the left towards a broken wagon. Once in cover behind this broken vehicle the player can make a noise to lure the final normal enemy towards them before taking him out.

This just leaves the eight blue enemies for the player to bring down, which will all need to be done simultaneously. Players will need to first move Isabelle to the top right side of the area where she can prepare to kill the two up here. She can hide behind the large tombstone here and then prepare to attack. The player will then be able to take Hector to the bottom left-hand side where he can line up a shot on all four of the enemies on the left side of the circle. All they have to do is ensure that their indicator highlights all four of the enemies.

With this done the player then just has to have McCoy aim at one of the enemies on the right side and then Kate can walk up and aim at the final of the enemies. Once all of the characters are in position, the player can then trigger the showdown and bring all eight of them down simultaneously, and the Cooper can kill Frank with no problems.

Desperados 3 can be played on PlayStation 4, Xbox One, PC,