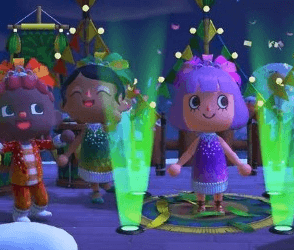 How to Get the Festivale Reactions in Animal Crossing: New Horizons

In Animal Crossing New Horizons, players can express themselves alongside Pave on the 15th of February with the Festivale reactions set.

The first half of February in Animal Crossing: New Horizons is dedicated to the annual Festivale event. Pavé the peacock performer arrives in the town square, colorful feathers drift around the island, and new Festivale themed items go on sale at Nook’s Cranny. In addition, the update adding the event is adding a new set of reactions to go along with it.

Players have been able to express themselves with reactions since Wild World on the DS. Much like how emojis represent a different emotion, reactions let players show others how they feel without words. With the Festivale update, players can learn new reactions themed around dancing and cheering. This guide will show how to add these reactions to the player’s collection.

Normally, the animal villagers around town are the ones who teach players reactions. Instead, obtaining the reactions for the Festivale is much more streamlined. Head on over to wherever Nook’s Cranny has been built and take a peek in the turquoise closet where all the tools are stored. From February 1st to February 15th, players can find the Viva Festivale reaction set available for purchase. However, though players will not have to randomly learn these reactions from their neighbors, this set comes at a cost; literally. Buying the set costs 19,800 bells, which exceeds many other items sold in the store.

This price may seem daunting at first, but it is easy to pay off without withdrawing anything from the town hall’s ABD. There are plenty of daily resources on the island that players can use to easily earn the required number of bells. Fossils sell for 5,000 each, so digging up four and selling them to Timmy and Tommy will yield 20,000. Also, selling five full stacks of foreign fruit, the ones not native to the island, will provide players with enough bells.

Immediately after the purchase, the player’s avatar will look at the card and learn the festive reactions. They can now be found in the reaction folder, just like all the other emotions the players can use. Hit ZR on the back of the right Joy Con to pull up with reactions wheel, then press Y to open up the full list of reactions. Alternatively, players can use the X button to replace one of their registered reactions with the festivale ones. Now, Animal Crossing players can get their groove on for the festivale, or any other occasion, in an instant!