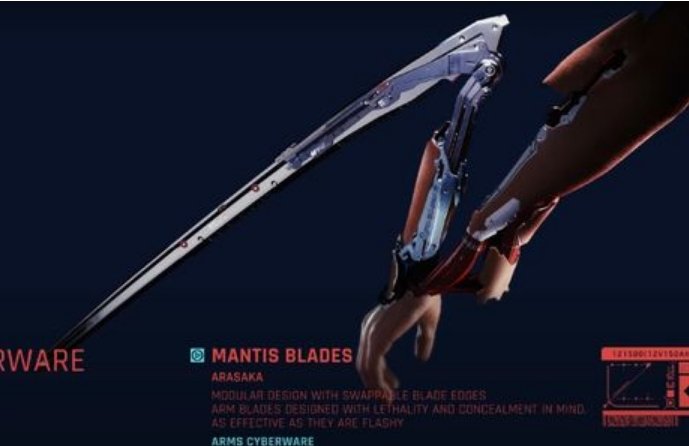 How to Unlock The Mantis Blades in Cyberpunk 2077

Players can unlock the Mantis Blades in Cyberpunk 2077 after putting some effort into acquiring the deadly cyberware to turn themselves into ninjas.

With Cyberpunk 2077 out in the wild, players have been wondering what the best builds, weapons, and general setups are the most useful in CD Projekt’s newest open-world RPG. For melee aficionados, the Mantis Blades are highly coveted, socketing into players’ arms slot in their character’s loadout to dish out some eviscerating slices. While players will have a lot of options in terms of weapons they can use in the beginning – mostly through looting defeated enemies – the higher caliber weapons must be purchased, crafted, or looted from more difficult foes.

Players will have to do a lot of grinding to unlock some of the better weapons, armor, and cyber modifications – which can be purchased from ripperdocs. Street cred (SC) is one of the most important aspects of Cyberpunk 2077, as some different weapons and equipment are gated behind a certain street cred level. The more useful or powerful the item, the higher players’ SC must be to unlock it, not to mention the decent chunk of eurodollars required to purchase certain weapons, or the crafting materials needed to create them.

How To Unlock The Mantis Blades In Cyberpunk 2077

It is with the game’s two currencies that players unlock the Mantis Blades in Cyberpunk 2077. The devastating melee weapon is available for purchase from a ripperdoc but requires players to reach level 20 in their street cred grind. Moreover, gamers must save up their eurodollars – the Mantis Blades cost 15,350 of them. However, for those who want to become a speedy ninja who dishes out swift melee strikes, dashes around the battlefield, and applies bleed effects to enemies, the Mantis Blades are a must-have.

The most difficult part of obtaining the coveted cyberware is achieving 20 street cred. Street cred is earned for tackling in-game content, including side missions, random events – such as helping the police or accomplishing small gigs for fixers – and main story objectives. Each level of street cred takes a bit of grinding, to the point that doing so by grinding optional activities can become tiresome. It is worth the effort, however.

Eurodollars are earned the same way as street cred, along with selling junk items or looting them from enemies or objects. Amassing eurodollars and saving them for the Mantis Blades does not take long, though, as players can earn a few thousand of the currency for completing side missions, gigs, and more. V’s Eurodollar balance increases at a much quicker pace than his/her street cred level.

How to Find Carmela Montez in Red Dead Online

Cyberpunk 2077 is available on PC, PS4, Stadia, and Xbox One, with PS5 and Xbox Series X upgrades scheduled for 2021.