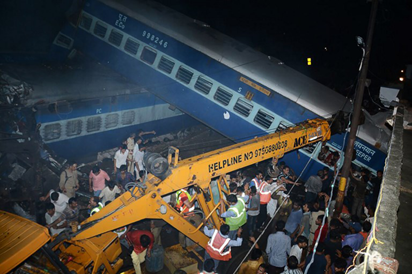 Emergency workers look for survivors on the wreckage of a train carriage after an express train derailed near the town of Khatauli in the Indian state of Uttar Pradesh on August 19, 2017. Ten people were killed and dozens injured when an express train derailed in north India on August 19, an official said.Emergency workers were pulling people out of mangled, upended carriages after 14 coaches derailed near Muzaffarnagar district in Uttar Pradesh state, some 130 kilometres (80 miles) from New Delhi.
/ AFP PHOTO

There have been so far no reports of casualty.

The accident happened near Nanwan station in the state’s Mahendragarh district.

The driver of the truck managed to escape, seeing the approaching train. “The Bikaner Express rammed into the truck, which was laden with household goods, after the latter got stuck while crossing the railway tracks, leading to the derailment of its engine,” a senior railway official said. “The truck driver escaped death by jumping off the vehicle which caught fire in the impact of the collision. Local residents rushed to the spot and doused the flames by water from a nearby pond,” he added. The train was on its way to Bikaner town in western state of Rajasthan from the Indian capital and was fully packed with passengers. “Railway traffic was disrupted in the area due to the accident and is expected to become normal only by later this evening. Senior officials have also rushed to the spot to ascertain the cause of the accident,” another railway official said. A full probe has been ordered into the incident. The state-owned Indian Railways is one of the world’s largest train networks, criss-crossing the country from north to south and carrying millions of passengers every day. Its safety record is poor, mainly due to the ailing colonian-era infrastructure.