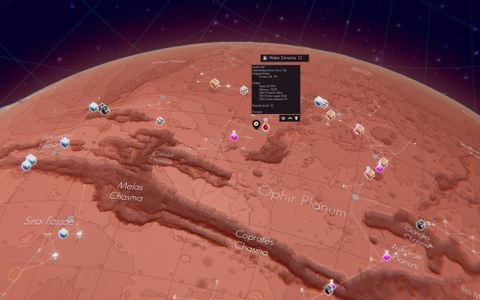 Per Aspera Review: Get Ready for a Slightly Bumpy Takeoff

Developed by Tlön Industries and published by Raw Fury, Per Aspera gives players the opportunity to settle Mars through the watchful eyes of AMI. Set in the near future, AMI has been tasked with collecting resources, securing colonies, and building the framework for a future society. While AMI has massive amounts of data at her disposal to make analytical decisions, she is also able to contemplate deeper questions, such as the state of her own sentience.

Sure to be a favorite among city-builder fans, Per Aspera brings players along on a journey through the solar system as they map out power grids, scan for natural resources, and uncover the abandoned colonization attempts of previous nations. With multiple different views, players can see how efficient a building is, prioritize and scrap structures, and monitor the environment as natural events unfold on the planet’s surface. While this is a helpful way to divvy up information for over-analytical players, others will have trouble remembering which button corresponds to which view. Per Aspera also gives players very little instruction at the start of the game, leaving them grasping for any kind of direction.

While players are waiting for their settlement to turn out materials, they can listen in on conversations between AMI and her superiors. While most of the time they can only eavesdrop, they can also influence some of her responses to various questions. This provides some entertainment during a player’s idle time and gives them context for events that will unfold later. As scanners reveal more structures to explore, NPCs will chime in to give players some exposition and break up the monotony of the simpler tasks. However, after a certain point a player’s progression through the game will slow down. As buildings stretch further and further apart, players will need to build support structures to accommodate them, such as solar and wind farms, maintenance facilities, and worker hubs. Players will also need to slowly expand their reach in order to harness more natural materials to mine and turn into resources.

Another way that progress begins to slow down in the second half is due to the careful placement of buildings. If a factory or mine is located too far away from an object being built, the transport system will take longer to reach it and may reallocate the resource somewhere else. Because of this frustrating problem, players may have to scrap the construction of a building and place it somewhere else after it reaches a standstill in receiving resources. This means that a lot of time will be spent just watching a buildings construction to ensure that it collects resources quickly.

What really sets Per Aspera apart from other city builders is its technology tree. Players can make their lives easier by collecting research points to find new ways to melt the polar ice caps, build more efficient buildings and roads, and find other solutions to the unique problems Per Aspera uses to challenge the player. As more sections of the tree are unlocked, players will be able to view those new items within their various building views. This means that players will have multiple different options on how to proceed further: would they like to collect as many resources as possible to have a well-rounded supply chain first, create a perfect system by upgrading their roads and factories, or discover all of the secrets on Mars and jumpstart the terraforming process first? The only downside to this is that the story moves along only as new structures are discovered and AMI completes special directives in orbit, meaning that players can’t complete a perfectly efficient system before moving on.

Another way Per Aspera is unique from other builders is that players will have to manage colonists in order to collect more resource points. Players not only need to build structures, but harvest food and water as well to keep colonists happy, adding a new level of thought-out realism to the game.

The level of detail Per Aspera provides for players, as well as pleasing visuals, voice acting, and storylines, are what really makes the Martian city simulator worth playing. Per Aspera’s gameplay experience could be improved upon with a clearer tutorial, objectives, and less complicated data collection, but what’s here is enough to make it a compelling experience nonetheless. Certainly, anyone with city building experience looking for more will be quite pleased, but those new to the genre still might find something of value in Per Aspera’s take on a tried-and-true archetype.

Per Aspera is now available on Steam. Screen Rant was provided a Steam code for the purpose of this review.