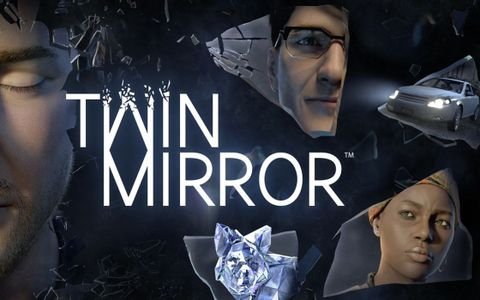 Twin Mirror’s intriguing gameplay elements and impressive visuals are undermined by a lack of breathing room to find nuance for its complex themes.

In spite of the curveballs thrown over the course of the year, 2020 has already been successful for developer Dontnod Entertainment. Episodic adventure Tell Me Why wrangled its difficult subject matter into an effective adventure game, striking a chord with those who appreciated the studio’s other output like Life Is Strange. Now, Dontnod is back, and turning its hand to self-publishing with Twin Mirror.

In Twin Mirror, investigative journalist Sam Higgs is returning to his home town of Basswood, West Virginia after the death of a former friend and coworker. Once there, his journalistic instinct kicks in, and Sam starts to investigate his friend’s death, only to unravel something far deeper and more dangerous than initially expected.

This setup might feel very familiar to long term fans of Dontnod’s work. After all, Twin Mirror is another adventure game about a small town with an awful secret that only a protagonist with unexplained powers can discover. Sam is no ordinary journalist, with some additional tools that help set him apart from the usual inhabitants of Basswood.

In spite of those surface similarities, there are some noticeable differences. Basswood is a more bitter and oppressive place than some of the other Dontnod game settings, although not quite as openly hostile as the studio’s depiction of London in underrated gem Vampyr. Basswood is a town on the edge, and Sam’s role in the closure of an unsafe mine that decimated the local economy means he won’t find many friendly faces.

Sam does have something to help his investigation, though. The protagonist has the ability to enter into his Mind Palace, a place outside of reality that allows him to revisit memories or work out hypotheses. It’s a vital mechanic in the game as Sam picks through past events in Basswood, uncovering the truth through this internal logic.

Alongside this the other unique element of Twin Mirror is Sam’s Double. The Double – otherwise known as Him – is a more confident, sociable version of Sam who chimes in during moments of distress with a different point of view. The ‘twin’ of Twin Mirror can be helpful or at other times disruptive, and throughout the game the player will need to decide whether to listen to the Double or ignore their advice.

These two areas give Twin Mirror a slightly different gameplay perspective from other Dontnod games. Although there are the usual dialogue choices to make and mild puzzles to solve, the Double adds a psychological friction that hasn’t truly been explored by the developer before. The Mind Palace has even more of an impact, introducing investigative moments that are almost akin to LA Noire.

One of the best elements of Twin Mirror is how visually striking it can be. The Mind Palace’s abstract existence has been fully exploited by Dontnod through its polygonal structures and physics-defying moments. It flickers between Max Payne’s dream sequences, the unnerving locations of fellow Remedy property Control, and even the bizarre dark pools of Under The Skin.

Twin Mirror’s not without its problems though. On PC there are some technical issues, including graphical glitches like some strange animations and lip movements not syncing properly that will reportedly will be fixed at release. However, given other games with issues that were promised a quick fix such as Assassin’s Creed Valhalla, it may be worth being cautious before committing at launch.

Some of the game’s problems aren’t technical, either. Twin Mirror’s dialogue is a little direct and unnatural, with characters seeming a little too willing to share their emotions, thoughts, and histories with an unliked main character. Given some of the suspicious actions that Sam partakes in, it’s a little odd just how talkative Basswood’s inhabitants are. Part of this issue is the length of the game in comparison to other Dontnod titles. Twin Mirror is quite brief, and this means the characters don’t really have time to stretch their legs, lacking the hours to really get an intimate understanding of characters’ motives. In short, too little time is spent with Basswood’s denizens given their shared history.

This bleeds through to another problem, as Twin Mirror attempts to tackles complex themes with not enough time to do them justice. The game covers the American opioid epidemic and the impact of a monopoly of employment in a local area within a free market capitalist society, yet without the space to discuss them at length. It’s a shame, as Dontnod had much more success covering drug use and mental health in Tell Me Why and alcoholism in The Adventures Of Captain Spirit.

With a bit more flesh on the bones, Twin Mirror could have flowed better. Sam makes some extremely distasteful choices in his quest, particularly with a group of opioid users living in a commune on the edge of Basswood – the real victims of the entire story – without giving the player any choice to avoid this linear direction. It’s an odd decision, given that later on a binary option is given to either accept or refuse an offer from the main villain to keep quiet for the sake of good, or speak the truth.

It’s these complicated themes that Twin Mirror struggles most with. Class discussions about the closure of the mine, or the hostility towards Sam and journalism versus the deadly conditions found in the town’s lifeblood are disappointingly under-baked. Although it’s made clear that there’s no redemption for Sam to find in Basswood – a refreshingly bittersweet note for a narrative-driven adventure game – it’s a far cry from the nuance needed to really dig into the narrative threads being tugged on by the game.

Twin Mirror is something of a mixed bag. Dontnod has introduced some great concepts and strong visuals, and there’s certainly potential within its characters and mechanics. However, it’s let down by its lack of depth, a problem exacerbated by its compacted run time and occasionally awkward dialogue. Fans of narrative adventures will likely still want to give this one a shot as reception to its story will certainly vary, but it’s best avoided by those who already have reservations about this style of game.

Twin Mirror releases 1 December 2020 for PC, PS4, and Xbox One. Screen Rant was provided with a PC download code for the purposes of this review.