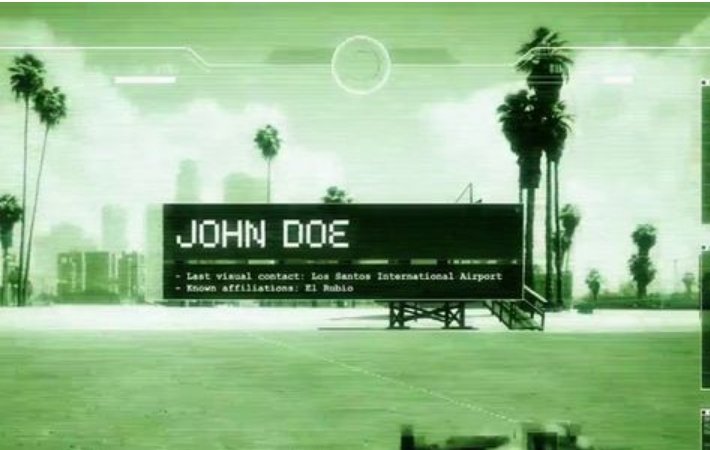 Where to Find John Doe in GTA Online

GTA Online has its own version of the John Doe character for players to find. This guide will help players locate John Doe in Los Santos.

John Doe is an anonymous character that has made an appearance in GTA Online. This guide will help players find him. The Grand Theft Auto series has always left behind massive easter eggs inside of each of its games. In the case of Grand Theft Auto Vice City, players were treated to a literal chocolate easter egg hidden in one of the cities windows. There is also the supernatural and unexplained, but the existence of Bigfoot and aliens throughout the series. Rockstar Games themselves revealed the location of a John Doe character with very little information to go off to find him. This guide will reveal where players can find this unique easter egg.

John Doe was introduced into the game as part of the Los Santos Summer Special on November 19th. John Doe is normally used as an alias for those who would rather have their real names classified. When players encounter John Doe, he will be a dead body with a bloody head wearing nothing more than a pair of dirty boots and white underwear. As mentioned, Rockstar Games tweeted a general idea of his location in a 10-second Twitter video, leading many players to this general direction to find him. This guide will show players where they can find John Doe.

Where To Find John Doe In GTA Online

John Doe spawns randomly in two different locations for the player to check. The first is at Vespucci Beach, players will be able to find him washed up in the sand. The location isn’t exact so continue to wander until the player stumbles across the body. The second location is at the Los Santos International Airport. As mentioned, his location is random for each player so it’s challenging to pinpoint his exact location. Players will know they found him when they find a man with a bloody face and wearing just underwear and boots. There will also be a briefcase near him. Continue to scout up and down the beach until you find it.

While there is no real value or item to collect when finding the John Doe body, it’s just one of those neat things to discover when online. Although, one of the newest additions to the game is the Cayo Perico heist. It includes tons of new missions for players to enjoy with friends, including purchasing a submarine for these missions. This would act as the player’s base of operations. As GTA Online continues to receive new content, it seems a new GTA title may take a while to release.

GTA Online is available now on PlayStation 4, Xbox One, and PC.